Matlock Band were awarded 3rd place at the recent Leicester Brass Band Association Contest in Loughborough. Playing off the dreaded number 1, the band put in a strong performance of Philip Sparke's Malvern Suite. M.D. Chris Banks was pleased with the continued development of the band and thanked Karen Birkett in particular for stepping into the principle cornet chair for the contest.

The Matlock Band have appointed Chris Banks to the position of Musical Director.

Chris currently plays Eb Bass with Jaguar Land Rover Band and brings with him a wealth of experience in both playing and conducting. Having previously taken over the baton at Syston Band, Chris led them to their first contest win in twenty three years and then to the National 4th Section Finals for the first time in their history by virtue of a second place finish at the 2016 Areas.

Upon learning of his appointment, Chris said that he looked forward to a long and prosperous time with the band and that he was fortunate to be linking up with a talented and capable group of players.

Chris will lead the band for the first time at the upcoming Bolsover Festival of Brass on 30th September 2018.

Geoff, on his final appearance as Musical Director was presented with a leaving card and gift from the band

Thank you to everyone who came along and supported the event. 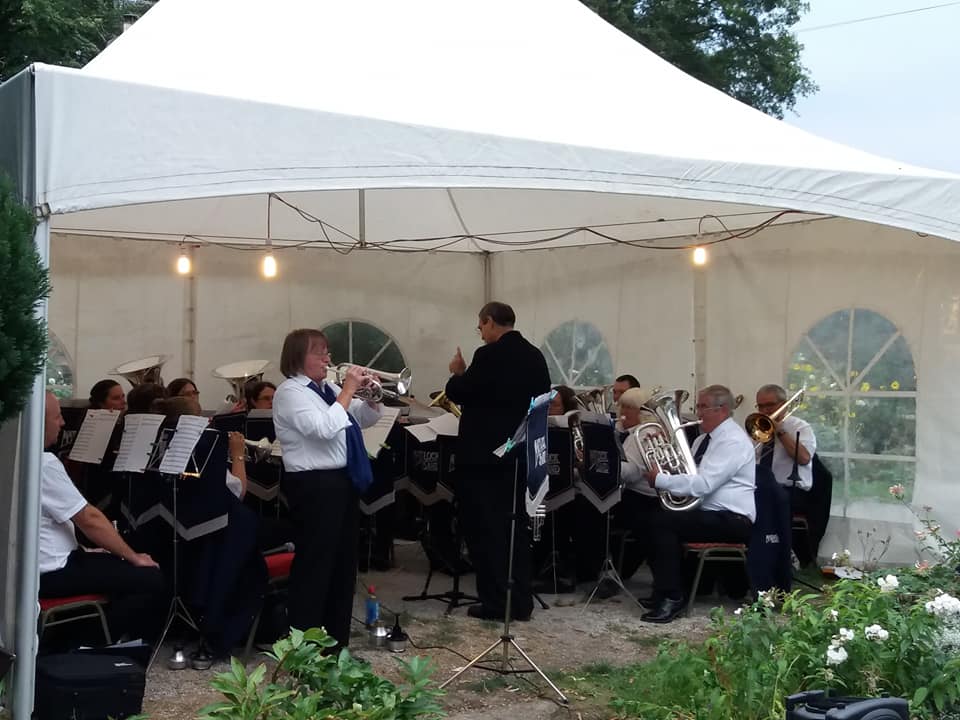 Musical Director, Geoff Hawley will bring his baton down for the last time with Matlock Band tonight at Barringtons Hotel in Darley Dale.

Geoff, who has led the band since 2014, is leaving due to ongoing health issues.

At tonight’s concert, as well as the bands usual concert programme, Geoff will also feature as a soloist as he bids farewell to the Derbyshire Dales.

The band would like to thank Geoff for the hard work he has put in over the last four years and hope that his health situation improves for the future.

The concert commences at 7pm and Matlock Band is the final band to perform following a successful programme of local bands throughout the summer.

Matlock Band got off to a flying start in 2017 with a win in the 3rd section at the NEMBBA contest at South Normanton. Playing band number 5, Matlock caught the ear of adjudicator David Hirst ,who awarded the band 1st position.

The result followed a busy festive season, both in recruitment and playing.

David Batley returns to the band on Solo Euphonium along with Trombonist Julie Dunn and Fiona Duncan on Cornet.

John Loxton made the 9500 mile trip from Australia to compete in his first UK brass band contest on EEb Bass and the band hope he enjoys his extended stay this year.

Following on from the success at South Normanton, the band was hoping for a strong performance in the Midlands Area Championships.

Having drawn band number 18 and last in the day, Matlock maintained their standard but on this occasion was placed 7th.

Drama was to unfold at the end of the day when a mechanical failure on the coach left the band stranded in Bedworth for 4 hours.

Having re-affirmed its position in the 3rd section, Matlock now look forwards to performing around the locality during the summer season.

Under the baton of Geoff Hawley, the band played a 25 minute concert programme which found favour with adjudicator Derek Renshaw.

Matlock Band are pleased to announce the appointment of Geoff Hawley to the post of Musical Director. Geoff has previously worked with the band and brings a wealth of experience to the role.

Geoff takes over from Andrew Dennis. The band would like to thank Andrew for his hard work and motivation during his time with us. His efforts yielded the band with several prizes and we are very thankful for his guidance during his tenure.

Matlock Band currently have vacancies for a Flugel and Solo Baritone players.

Matlock Band would like to thank Geoff Hawley for stepping in to conduct them at the Buxton Brass Band Festival after regular M.D. Andrew Dennis was admitted to hospital.

With limited rehearsal time, Geoff led the band on Philip Sparke's Kaleidoscope to 2nd place in the 2nd section.